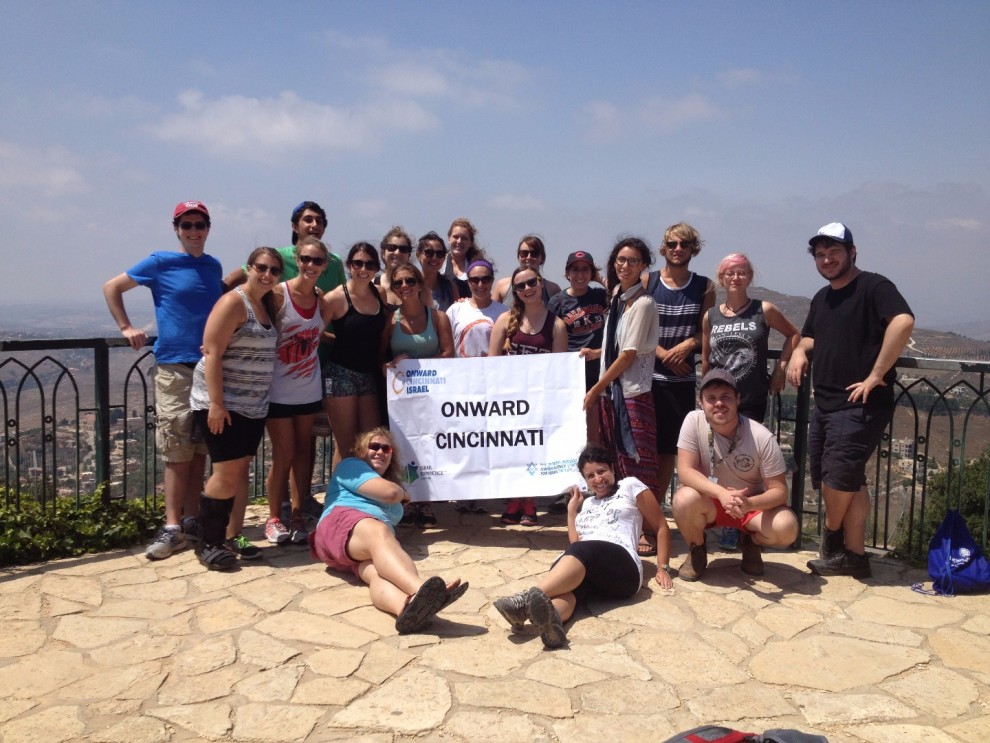 As school starts up again, the 135 young adults who participated in an Israel travel experience from Cincinnati can look back on an impactful and meaningful summer. For example, in one of the programs, Onward Israel, participants dove deep: one published a research paper on sea turtles; another produced a video on increased business by the Chinese in Israel.

This past summer was the second year that Cincinnati participated in the Onward Israel program, sending a group of 17 young adults who joined more than 1200 students from around the world to work in internships in their chosen field while living in Tel Aviv or Jerusalem.

Ricky Mulvey spent his summer at Newshound, a global media company with offices in Tel Aviv. “While I was a production intern, I had almost all of the responsibilities of a full-time producer: I organized interviews, researched and wrote questions, conducted interviews, edited scripts, and pitched stories,” Ricky said. “I produced a story on the Chinese doing more and more business in Israel. For this, I set up all of the interviews and went out on most of them, did a lot of the research, and felt like I had a big part in producing it. That was totally satisfying.” (You can read about Ricky’s experience on his blog: middleofeast.wordpress.com).

Jane Sushanksy interned at the Sea Turtle Rescue and Rehabilitation Center in Mikhmoret, just north of Tel Aviv. “I even wrote a research paper for publication, created YouTube videos and worked on sea turtle enrichment projects,” she said. “Five turtles have been released and I had the privilege to participate. This has been an amazing experience.” (You can read about Jane’s experience here).

In addition to lessons learned in their respective fields, students got a feel for workplace culture in Israel.

“Everyone is really great and they work super hard, but they also know how to have fun, and mostly everyone goes out to lunch together in the middle of Tel Aviv because our office is in the center of the city,” said Carly Edelheit, who spent her summer at Israeli startup company, Genome Compiler Corporation. (You can read about Carly’s experience here).

The Onward Israel program is an innovative partnership between The Jewish Agency for Israel, The Jewish Foundation of Cincinnati and the Jewish Federation of Cincinnati. It is designed as a second peer experience in Israel and a Birthright follow-up program for Jewish undergraduate and graduate students, ages 19-26. The program provides resume-building experiences in areas where Israel has a global competitive edge. Participants intern four days a week, and spend one day a week in group educational sessions or on tours.

As these 135 teens and young adults begin the new academic year, it’s clear their experiences will have long-term impact. Studies have shown teens who travel to Israel have higher levels of Jewish commitment in the long term, with short-term benefits that include increased engagement with family members. For many teens and young adults, a trip to Israel encourages them to pursue exploring their Jewish identity after they return home, leading to the development of adults who are connected to and invested in their culture, faith, and community.

Ties among adolescent travelers are also strengthened as they experience and explore their Jewish identity together in a remote, yet relevant environment. Furthermore, trips to Israel are long enough to ensure that teens experience Israel more fully. They get the chance to meet different types of Israelis and learn or hone their Hebrew. Many leave Israel craving more, and choose to further their Israeli adventure in college and beyond.

The Cincinnati Jewish community is in the enviable position of having these Israel experiences in reach of every Jewish family. Funding for these trips has been made possible by The Jewish Foundation of Cincinnati through the Israel travel grants program, Cincy Journeys, which is administered by the Jewish Federation of Cincinnati.