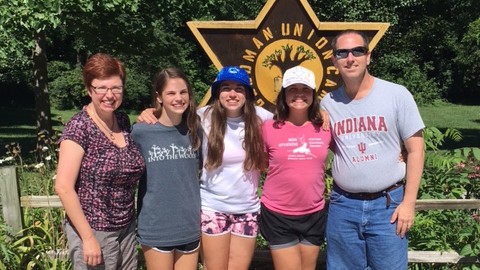 Jeff Schlaeger is the first to admit that his upbringing was “Jew-ish.”

“I really had no clue at all. We lit candles at Hanukkah. We sort of did Passover,” Jeff says. “We took the day off for Yom Kippur, but I never understood why.”

“My wife came into Judaism in adulthood, so we’ve been learning on the go, through the lenses of our children,” Jeff says.

Looking back, he says a major catalyst for Jewish connection in his family was camp—beginning with his own experience as a counselor just out of college.

“I worked at a Jewish camp for the summer in Wisconsin just because I needed a job. But I really enjoyed it! It was cool, fun, and I thought—I can’t believe I’ve missed out on this!” Jeff says. “At camp—that was my first taste of Shabbat and other Jewish tradition.”

The connection held, because when Jeff and his wife were searching for a “spiritual home” for their young family, they chose Judaism.

“When we had Ashley, our oldest, it was time to make a spiritual choice—and we found acceptance at Temple Beth Or in Dayton, and then at Valley Temple in Wyoming,” Jeff says.

And that’s where camp came up again. Valley Temple’s Rabbi Sandford Kopnick couldn’t say enough about the role overnight Jewish camp plays in a child’s development of his or her own Jewish identity.

“He grew up as a camper and a counselor himself, so he really promotes it. He said you really need the camp experience. At first I was skeptical, but it’s definitely true,” Jeff said.

He witnessed it firsthand when he picked up his oldest daughter, Ashley, from her first summer at Goldman Union Camp Institute (GUCI). She was only eight years old at the time.

“She was happy to see me, but she wanted to stay longer! I just felt like that was this jolt of independence in this eight-year-old kid, and she hasn’t looked back since,” Jeff said.

Now, as a senior at Mason High School, Ashley is the Programming Vice President for the Ohio Valley regional chapter of the NFTY, the Reform Jewish youth movement.  She’s spent the last nine summers at camp; most recently, on a camp trip to Israel in 2015 and as a young leader in 2016.

“There’s a different fire in her when she’s doing all things Jewish. Overnight Jewish camp was the catalyst for that,” Jeff says.

“Just the community of it,” Ashley interjects, talking about what made camp unique. “People were so accepting, and I knew these people were the kind of caring people I wouldn’t find elsewhere. It’s nice to be around people who have the same values as you do and approach issues from the same place.”

As she considers where she wants to go to college, Ashley says finding a way to stay involved in Jewish life is crucial.

“I’m looking at Judaic studies, or some involvement in the Jewish community past high school, for sure,” she says.

Now, Jeff’s younger daughters, 14-year-old Alanna and 11-year-old Ella, are following in their older sister’s footsteps. He says he watched in amazement two years ago as Alanna’s circle of friends transformed because of camp. 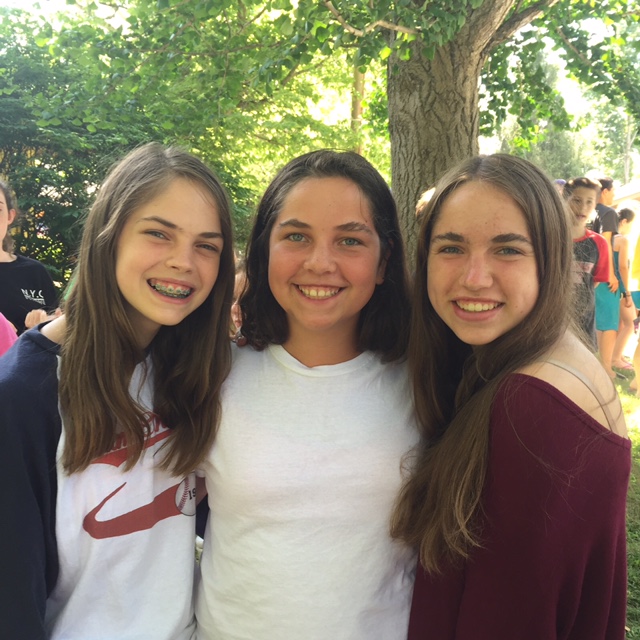 “She must have gone to a dozen bar and bat mitzvahs that weren’t in our temple that year. Those relationships started to bloom suddenly. There were more of them, and they’ve lasted! She developed a close-knit group of friends that really stayed that way,” Jeff says.

As for Ella, his 6th grader, “she really does love it,” Jeff says, thinking back on his youngest daughter’s second full summer at camp this year. “She’s talked about wanting to become a rabbi.”

As a result of his daughters’ experiences, Jeff says his family’s collective Jewish identity has been greatly enriched.

“The kids are the ones reminding us, ‘Hey Shabbat is coming up.’ And we say, ‘You’re right, let’s light candles,’” Jeff says. “I still don’t know Hebrew at all, but we enjoy going to temple, and we go often.”

Along with all of the benefits, sending three kids to camp for 17 combined sessions has had costs, too. Jeff says the non-need-based Cincy Journeys Overnight Jewish Camping Grants have enabled him to keep the summer fun coming for his kids, year after year.

“We’re not a family that’s flying to Hawaii, because they know going to camp is their big summer trip.  And they wouldn’t trade it for the world,” Jeff says. “At one point, we had 44 different zip codes represented in our congregation. And so camp is the way they all connect, year after year.”

He knows the connections his kids are making will only become more important as they become adults.

“Our three daughters have grown into confident young women who make their Jewish identities a major priority,” says Jeff. “I love who my daughters are becoming, and overnight Jewish camp has been a big part of that.